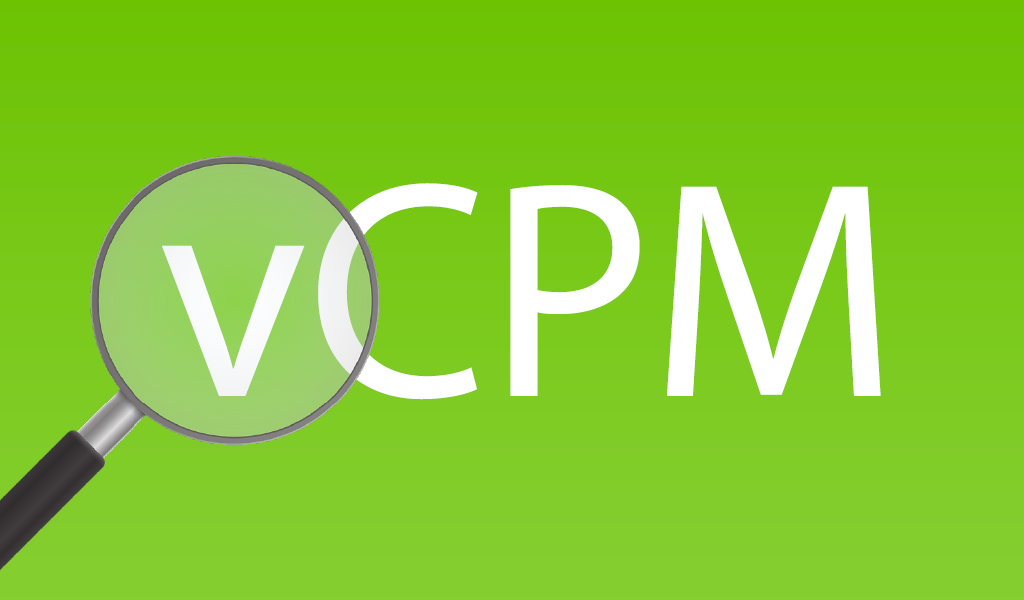 Many media buyers are already familiar with the process of buying and pricing ads on a CPM basis. However, many advertisers are still unfamiliar with vCPM ads and the huge benefits they come with.

vCPM (sometimes referred to as VCPM, CPMV, or CPMv) is an emerging metric that measures how frequently an ad is actually seen by users, and not just merely the number of times it is served by the seller. More simply put:

What are Viewable Ad Impressions?

The Internet Advertising Bureau (IAB) defines an ad impression as viewable when a seller can verify that a user saw more than 50% of the display ad for longer than 1 second. Video ads sold on a vCPM basis work in a similar manner, requiring users to see more than 50% of the video ad for longer than 2 seconds before counting the impression as viewable.

According to data points collected from more than 500 industry-leading websites and apps, more than 50% of all ad impressions served online are tracked as either non-viewable (not tracked as seen) or unmeasurable (in cases where viewability data is not available due to technical limitations). In other words, half of the ads served digitally are never really seen by anyone. This results in advertisers paying over 2X more for CPM ads (with no viewability guarantees) than vCPM ads (with viewability guarantees) to reach the same amount of people.

Because of the lack of viewability guarantees CPM pricing comes with, it is considered to be a much riskier investment for advertisers than vCPM pricing. Seasoned advertisers know this, and are spending more money on vCPM ads, opting to pay a set amount for 1,000 guaranteed viewable ad impressions.

“Above the Fold” ≠ Viewable Impressions

Buyers may come across sellers who are boasting their ad inventory is “above the fold,” a common term used years ago to describe an ad positioned in the upper half of a web page that does not cause a user to scroll to see it. However, this concept is no longer relevant in digital advertising now that ad servers can actively track ad viewability. In fact, in some cases, ad inventory that is located above the fold could actually perform worse than ad inventory displaying below the fold.

For example, if there is an advertisement in the header of a website template that takes 1 second to load, and users that hit the page scroll down quickly below the ad zone to read the content they were expecting to see below, then the ad may never be seen at all. On mobile devices, the trend of users scrolling by ads loading at the top of the screen is amplified, especially on websites with multiple ad providers / slow ad load times; it’s one of the most common issues overlooked by many advertisers and publishers alike. With viewability metrics, these problems can be avoided and ad zones can be tweaked by publishers using data insights to provide advertisers with better viewability.

Conclusion: Advertisers need to hold publishers, agencies, and ad networks accountable and demand transparency. Knowing how your campaign truly performed and how many people actually saw your creatives is vital. With today’s technology, sellers have no excuse for failing to offer visibility metrics to advertisers. Savvy internet marketers are opting to bid for vCPM access rather than CPM access, saving them over 50% by ensuring they only pay when their ads are really seen by readers.

Choose an option below to find the perfect solution for you:

3 Reasons Every Brand Should Be Investing in Native Advertising
Three Types of Deals That Could Destroy Your Property’s Long-term Bargaining Power
Truth in Advertising: Is That CBD Truly Organic?
Free Resources To Protect Your Cannabis Brand
GDPR and MANTIS: What You Need to Know
Ad Visibility 101: How to Optimize Your Website for MANTIS Ads
3 Easy Ways to Optimize Your Website’s Mobile Ad Placements
Local Advertising 101: How to Market Your Dispensary or Cannabis Business
Cannabis Advertising Pitfalls To Avoid With Your Social Marketing Strategy

Whether you need to find more customers or monetize your digital property, we can help.

Get started with FREE tools, or get more with our premium software.